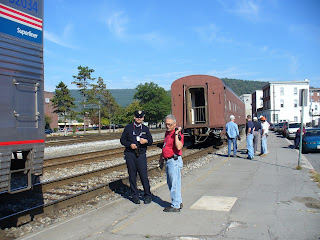 Photo 13:
Cumberland, Maryland
Amtrak Station
Wednesday, October 3, 2007
Photo by Bob Andrews
In the photo, Amtrak’s conductor and road superintendent coordinate after cutting the Chippewa Creek off of the Capitol Limited. An operation that the conductor achieved in less than seven minutes! The CSX switch crew, along with Assistant Terminal Manager Keith Stafford, are standing-by on the platform. Next to the Superliner, on the adjacent track and out of view, is CSX locomotive No. 2432, waiting to take us off of the CSX main, into the Cumberland Yard, and then onto the WMSR interchange track. 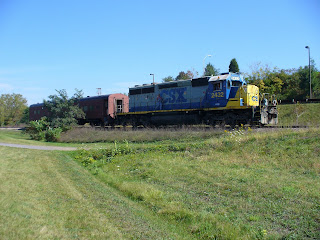 Photo 14:
Cumberland, Maryland
CSX – WMSR Interchange Track
Wednesday, October 3, 2007
Photo by Bob Andrews
MISSION ACCOMPLISHED!! Our CSX switch crew, with the assistance of CSX No. 2432, position the Chippewa Creek on the interchange track with the Western Maryland Scenic Railroad (WMSR). Dan Pluta, and the fine shop crew of the WMSR, will pick up the Chippewa Creek with their engine tomorrow. Once in the WMSR shop, the Chippewa Creek will be renovated to Amtrak standards, and will return in the splendor she had when she once ran on the Broadway Limited.