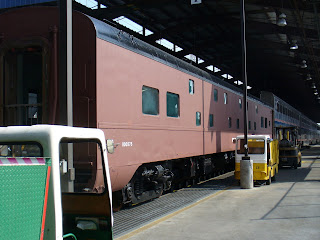 Photo 1:
Los Angeles, California
Amtrak Maintenance Facility
Saturday, September 29, 2007
Photo by Bob Andrews
RPCX 8369 / Amtrak 800375 (nee-PRR 8369), the Chippewa Creek, on the end of Amtrak’s No. 4, The Southwest Chief, over the pit at Amtrak’s sprawling Los Angeles Maintenance Facility. Having arrived Friday evening, the first order of business on Saturday morning was to find the car! In the case of the Southwest Chief, the train consist is fully made-up and moved over the pit for maintenance and inspection. At this point the Chippewa Creek is being hooked onto the Chief, its airlines connected, and the entire train’s airbrake system is checked. As the Creek would be operated without head-end power, the battery operated rear marker light was also attached by the crew at the pit. Having introduced ourselves to the Amtrak general foreman and the maintenance crew, we opened the car for our inspection, and cheerfully gave tours to the Amtrak personnel, including Assistant Superintendent, Jack Wilson, and Trainmaster Bruce Selby. It was gratifying to learn that all of the Amtrak employees we met were enthusiastic about our plans to renovate the Creek, and looked forward to seeing it once it was fully restored. Having found the car, and presented ourselves, we were off to Home Depot for batteries, gloves, Ty-raps, duct tape and everything else George hoped he wouldn’t need to fix what he hoped wouldn’t break. Then on to a food store to stock the car for our four-day adventure. Logistically, we rapidly determined that it would be best to stock the car, and move our luggage onto the train at the pit, rather than try to move all that material through Los Angeles Union Station and then load off the platform. Once we returned to stock the car, we met our Sleeping Car attendant, who showed us our room on the adjacent Superliner sleeper, and allowed us to pre-load our luggage. When the Chief was backed into the station, our luggage would already be on board. We were told that the Chief should be backed into the station at about 4:30 p.m. in advance of our scheduled 6:45 p.m. departure. 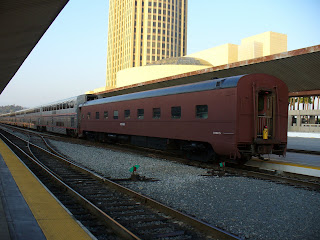 While we were both very excited, we were also very anxious, as the Creek had not moved in high-speed passenger service in 30 years. Unfortunately, unlike your classic automobile, you can’t take your classic Pullman car for a “test drive”. We both (George as an Amtrak private car inspector, and Bob as a fire chief), fully understood our responsibility to have done as much as possible to make sure the Creek was ready for its trip. Early on, we adopted an attitude akin to launching the Space Shuttle – “we only have one shot at this, and we have to get it right the first time”. Failure, for safety reasons, as well as potential damage to our personal reputations, and that of our community, was just not acceptable.

Over the next four days, we would both ride the Creek and spend time in our Amtrak Family Bedroom. We would need to move between our car and the train at certain station stops, and always in coordination with the Amtrak conductor. Since the Chippewa Creek was moving before restoration and without electrical power or a functioning water raising system, we booked the bedroom on Amtrak primarily for sleeping, restrooms and showers, and hot food service. It also gave us a great opportunity to interface with the Amtrak crews on both the Chief and the Capitol Limited. On the Chief, as shown in the photo, our bedroom was in the Superliner immediately forward of the Creek, which would make for our easy transfer between the cars.
Posted by Bob Andrews at 2:05 AM