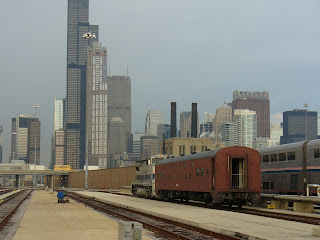 Photo 7:
Chicago, Illinois
14th Street Yard
Monday, October 1, 2007
Photo by Bob Andrews
After traveling 2256 miles, and after 35 years, PRR-8369 the Chippewa Creek is back in PRR home territory in Chicago! The Creek has just come off the rear of the Southwest Chief in the 14th Street Yard. Amtrak P-32-8, No. 518, is shown here switching the Creek into the shop for her brake work. 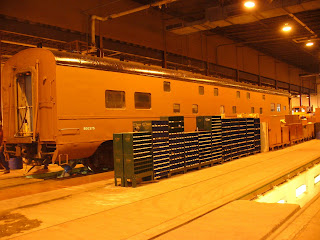 Photo 8:
Chicago, Illinois
14th Street Shop
Monday, October 1, 2007
Photo by Bob Andrews
It’s about 6:00 p.m. Monday evening. We meet up with General Foreman Jim Lewis and his top-notch crew. Jim’s folks immediately swarm all over (actually, under) the car. To a person, they are efficient and competent, and understand that our goal is to be on the end of the Capitol Limited tomorrow evening at 7:05 p.m. One of the carmen commented that the car was built a dozen years before he was born. We learn that the consist is usually backed into Union Station at about 5:00 p.m., so we have less than 24 hours to get our parts to Jim’s team, and for them to make the repairs. Mr. Lewis is more than impressed that we were able to locate cast iron shoes as quickly as we did, and also impressed that we had a breakhead on the way via overnight delivery. One breakshoe did actually split (we assume very close to Chicago) and there was very minor damage to one breakhead, but Mr. Lewis’ very competent mechanic said he could build-up the head by hand using weld material. Wow, are we impressed! We then reviewed together that the breakshoes on the Creek needed to be of sufficient thickness to make tomorrow’s 629-mile trip to Cumberland, Maryland. We quickly got a report from Mr. Lewis’ team regarding which brakeshoes were thick enough to make the trip, and which, due to un-even wear, ought to be replaced with new shoes. We agreed that eight new shoes would do the trick. Again, as with Conductor Marti Ann Draper, Jim Lewis takes his responsibilities for the safe operation of the equipment he repairs, extremely seriously. There was no doubt in our minds, that Mr. Lewis would not allow the Chippewa Creek to leave his shop, and be added to the Capitol Limited, unless he was certain the car would make the trip safely. Mr. Lewis then kicked us out of the shop, saying , “we’ve got this, go get your brakeshoes”.

So, as Bob drives and George navigates, we head west about an hour and a half to meet up with the good Mr. Kallas. And guess what? Nick had “magically” found eight brand-new cast iron brakeshoes, which we promise to replace as soon as be get to Cumberland. We visited a little bit, thanked Nick profusely, invited him to join us for lunch tomorrow, and headed back to Chicago. We met up with Mr. Lewis right before the swing shift was about to go off-duty at 11 p.m. Jim advised us that his welder did indeed build up the breakhead, and all of the brake rigging had been shimmed and realigned. It turns out that Jim would be also working tomorrow’s day shift, and he advised that he would personally make sure the day crew installed the new breakshoes, did a final alignment, and tested the car. We went to the hotel tired, but very happy, grateful for Nick Kallas, and extremely impressed with Amtrak’s Mr. Lewis and his maintenance team. 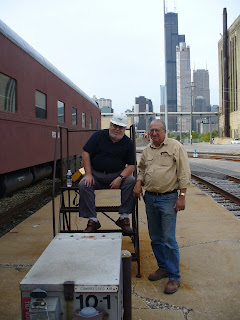 Photo 10:
Chicago, Illinois
14th Street Yard
Tuesday, October 2, 2007
Photo by Bob Andrews
It’s now Tuesday morning. We slept in a little bit, had breakfast, and waited for Dan Pluta’s FedEx package to arrive. We made plans to have Nick Kallas meet us at the 14th Street yard (where we would show Nick the Creek and then go to lunch together). We then checked out of the hotel and headed for the yard.

Upon arrival at the Shops, we were surprised, and very pleased, to find that the Chippewa Creek had been moved outside. We caught up with Mr. Lewis who informed us that they had completed their work by 10 a.m. and the car was ready to be switched out of the shop and onto the rear of the Capitol Limited’s consist. Bob went to the office where he signed the appropriate Amtrak paperwork while George thanked Mr. Lewis’ day crew. Mr. Lewis told us where we would find the Creek and the Capitol Limited when we got back from lunch. We promised Jim we would bring the Creek by his shop once it was renovated so he and his folks could see it. We then went to lunch at a fabulous Greek restaurant of Nick’s recommendation. After lunch we returned the rental car, as we both wanted to ride the Creek while it was backed into Union Station.

In this photo, George Payne and Nick Kallas visit next to the Chippewa Creek in the 14th Street yard. The Creek has been attached to the consist, and will be bringing up the markers on Amtrak’s Train No. 30, the Capitol Limited. We’re about an hour from being moved into Union Station. While waiting, we were pleased to give tours of the Chippewa Creek to Amtrak’s Chicago Terminal Trainmaster Don Crimin, as well as RPCA Information Exchange editor Stan Brandt and his wife Claudia.